Where is the slog at? 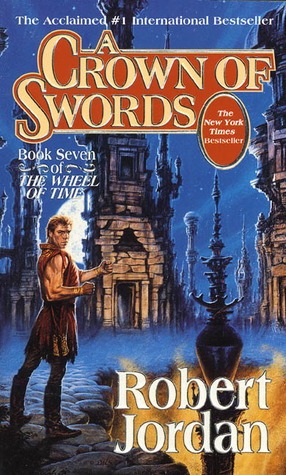 A lot of people say that the slog is a myth and bunch others that it starts from book 6/7/8; I am leaning towards the myth. Although books 6 and 7 were a bit slow except at the end, no way they were boring and I never had to force myself to read. A Crown of Swords seems to be an obvious build-up book and for that part, it does a good job.

Great character growth for Rand, Nynaeve, Elayne, and Mat. Elayne and Nynaeve are finally bearable except for one part. Mat is a fabulous character and it just went on to show how selfless he can be when he offered his medallion to Elayne. Coming back to the one part, I have always overlooked the issues with gender in Jordan's writing as a lot of things made up for it. That said, Elayne and Nynaeve's reaction to Mat getting raped was just plain disgusting. On top of that Mat's comment about chasing the woman who raped him next time was just ridiculous. What on Earth was Jordan thinking?

Rand and Min seem to have the perfect dynamic in comparison to his other love interests. Like I mentioned for Lord of Chaos, this might be the only relationship that has made sense. She is the perfect anchor for his sanity and I cannot think of anyone better.

Perrin and Loial have been very disappointing. While Perrin is in character with his actions, he isn't getting any growth for a while now and I am just wondering why Jordan simply didn't kill Loial off.