Now that was a wonderful foreword. I honestly can't tell much of the difference in writing style due to the change of authors; Sanderson has of course removed some of the redundancies, braid tugging, and spanking which I am grateful for but there doesn't seem much change overall. Quite a smooth transition.

I would very much like to love Gathering Storm given that Rand takes it to a whole new level... Only Egwene kind of brings it down. 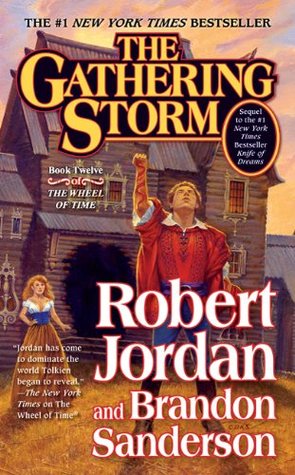 I am kind of not liking Egwene and not in a good way. The only two moments I did like her are first due to Verin and not her, second during the battle against Seanchan where one could believe that it was actually Egwene. Verin's chapter was simply beautiful; I am so looking forward to focusing on her when I re-read the series. Now, I might seem like a broken record seeing how I mentioned this in a bunch of my previous reviews, but Egwene was never built up to be this sort of leader or persuasive person. On top of that, the excuse of ta'veren does not work for her. Unfortunately, she takes the spotlight of Gathering Storm. Since it seems to be at a point of no return, I am just going to read WOT as though she is a ta'veren; It will definitely make it an easier read.

Loved Rand through the entire book. His eventual breakdown has been a treat to read and him almost killing Min and Tam were the best low points one could have chosen for Rand. I am curious to see if he is still out of control.

It seems that my prediction of Moirane not returning was right, sadly. This would be the perfect time for her to return to Rand.

Mat's plot was neat; Nothing special. The village subplot was definitely very very out of the place for Wheel of Time. Very. He did provide a rather enjoyable comic relief; Never change Mat.

And, I am glad I didn't get much of Perrin and nothing of Elayne. Very glad indeed.